Today I'm getting nasty with patterns. And I'm making the rainbow my bitch. What bought this on? Just the discovery of pretty much the most interesting men's store EVER, Meriken Designs. It's owned by Yaszi Mornington, a Japanese designer who is a master of texturing. I haven't seen hand drawn clothing this good since Casa Del Shai. Yes, I'm daring to make that call. Bring it. I was teleported in by Voshie Paine, and when it rezzed I fell to my knees in awe and worship. Colours. Like you wouldn't believe. After I sprayed an obscene amount of lindens all over the walls I was left with a pile of amazing clothes that by no law of taste or physics should be seen together. So of course I put them all on. 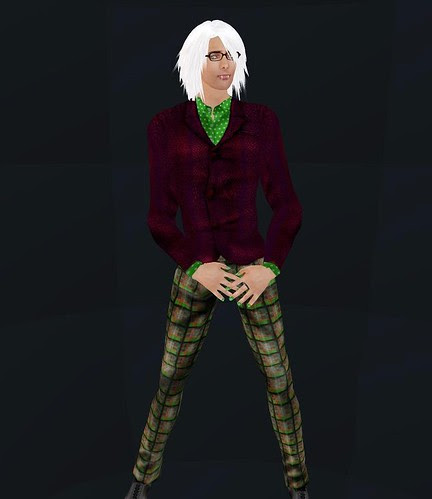 I'm pleading with the men of SL to be more adventurous.Now... you can mix different patterns, textiles, textures and shades. The trick is to keep trying different configurations until you find one that isn't physically painful. This is where you scribble out the rules of what you know to be good taste, and just cycle through everything you have until it looks good. Even if it doesn't. You'll know when your eyes stop bleeding. No way would I have ever have thought vermilion would have looked this darn good with green, orange and fawn. That's before you toss in the melange of tartan, spots and stripes. In theory it shouldn't work. But - it does.

This mess of tones comes off as springlike and breezily casual. Part of that is the attitude, part the accessories, but mostly the “blorangeness” of it all. Because the colours are complimentary on the spectrum you get a fair bit of leeway with the clashing patterns. Whereas with this ensemble the madly pink spots have the odd yellow one, and that ties it in with the gold crocodile jacket. Keeping the pants a single solid shade this time means it's just on the side of good enough taste that I wouldn't get turned away at 7 Ultra. I think.

Not that I'd wear that there, I've been reserving this super-pimp-a-luxe Sesame suit in Vin for that. This is a pre-prepared ensemble, but it's so well toned together that I have no problems wearing it out of the box. The plum velvet has a Paui shell sequin detail on the lapel that ties in with the dotty shirt, and the different coloured buttons are interesting all on their own. I also bought the whole set in Noir as well, but to piece it up. These are the pants - and this is the pink python jacket that was originally teamed with the green spotty shirt in the first picture, but I wanted to tone it down, make it a little less outrageous and more stylishly wearable. Otherwise it be relegated to the back of my inventory as merely the 27th pink jacket I own.

One thing I do want to add so it doesn't look purely as if I am pooing rainbows. The gold croc jacket was on the vendor with a pink shirt, and I bought that as I did so much else. When I took it home and tried it on it was only half the shirt, the midriff was exposed. I messaged Yaszi and mentioned that I loved his clothes, I had bought a buttload but it appeared that this set and one other I'd bought had just the half shirts included, and it looked to be a simple error, how could we fix this? As several of the other jacket/shirts I had bought at the same price were complete. I received a reply a few days later that the shirts were only a sample. And if I wanted the real thing they were for sale seperately. I can't say I was thrilled with this customer service as they had appeared on the vendor as a set. But I loved the clothes and the colours so I went right the hell ahead and blogged it anyways, with the shirt that was included in the Sesame Noir set. So that's a caveat emptor warning, just check what's actually included and that you are happy with it.

On the whole I am still gibbering several days later in a complete colourgasm, and I'll be stalking the store for all future releases. He also has an outlet at KMADD City, and a new one at the Starlust sim. I know I was a tad preachy in this post, but... guys. Step outside the black occasionally, okay? Don't let the Vampire be the only polaroid nightmare out there.

Posted by Winter Jefferson at 10:59 AM