Yes, that's actually the name of this av. 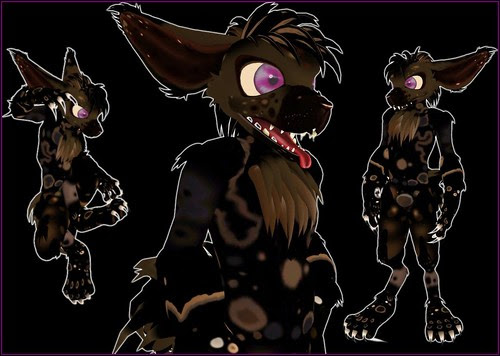 After seeing Achariya's Griffin post of last week, I knew it would only be a matter of time before I moseyed on down to Tokushi's Avatars myself. It took me a week. Damn, what a waste. I've never before slept on a purchase, but the only thing that stopped me from CLEANING OUT THE ENTIRE VENDOR was the fact that these were 900l each. And even now I'm planning on going back for the Anubis. And the Dragon. And the Wolfhound. And possibly even the Armadillo...

It has an included HUD, and with that you can adjust eye colour, facial expression and the tail and ear positions. It comes with this shape, the best way to wear it - as well as a female and a male one for those who prefer to go without the digigrade arms and legs. For me that's most of the fun. It's also a challenge to wear clothes like this, but I couldn't resist the urge to Winter him up a little.

Normally I'd get all annoyed and stuffs if you said I was "cute..." but even I have to admit that I went "Squeeee!" upon log in, having forgotten that I was wearing this when I logged out. Not my little girl though, she was most insistent that I was scary, and she wanted to see Winter again. Because Vampires are less scary than imaginary creatures apparently modelled after a Walt Disney possum dream, obviously.

Okay, so I'm not a Fur. But some things are just too... damn.... cool. And that's what SL is all about, right? The Cookie Fnuffs come in 6 different colours - flavours, really - and I came very close to buying the bright pink one with rainbow sprinkles. I think I'm skirting the far reaches of masculinity enough with the Burnt one though. There's a variety of fantastical creatures, and Elusyve bought the Qwhilla which she'll be posting too. 900l is a hard hit, agreed. But the workmanship, colours, scripts, and just plain joyful imagination which has been poured into each one makes it worthwhile. And with a little bit of effort you can customise them to make them into your vision. It hit me afterwards that the Fnuff resembled the character "Stitch" - so if you see a short brown dude in a pink hawaiian shirt at the Rainbow Tiger or The Ark during the week chances are that's gonna be me.


And I have to give props whilst I'm here to Harper Beresford of the House of Rfyre for taking my own words and completely owning me with them on yesterday's post. I'd still be "preening" today if I wasn't laughing so damn hard.

This is what this post would look like if it were taken from the House of Rfyre blog.

Raven was busying herself, when she heard a noise coming from her studio. She looked up in startlement, grabbed her dagger and stealthily made her way up the stairs. She crept through the door, made ready to pounce - then stopped. "Oh, no..." she groaned. "Who the hell let YOU in here?" The white haired vampire stopped rummaging through the reams of fabric, looked up and grinned. "Don't you think it's about time you started making these things in pink?" Raven shook her head in bemusement, turned on her heel and walked from the room muttering "I've got to get the exterminators in..."

Good luck keeping me away from these kilts, though. This is Bytterwynds, the Highland warrior set that was created a couple of months ago in plaid. It's just been released in a gorgeous moss green, a subtle tan and this deep sexy black. The black at the moment is only available at the RFL show at the Rfyre stand on the Black Sea sim that they are sponsoring, and no word yet on it's general release.

You can see the amazing detail in the celtic knotwork throughout this whole design. The studs have the sheen of age embedded into this black leather.

The best thing about these sets is that they come with plenty of options. There are two lengths of kilt, a shoulder scarf, a choker, three styles of tunic and five lengths of pants - bootcut and regular. You also get these wicked arm bands with or without the daggers. 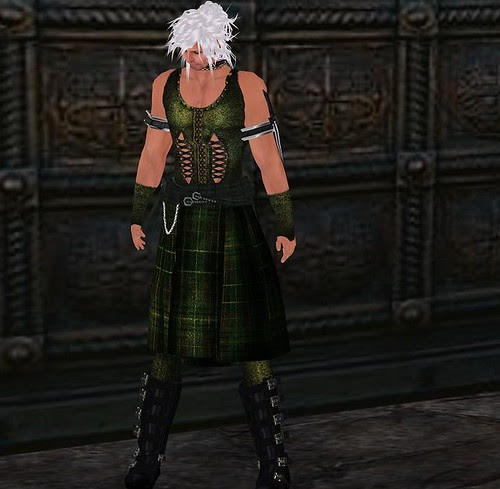 If you aren't a freak for kilts... then what are you doing on my blog? No, seriously - the leggings that come with these sets aren't your usual cut corner glitch pants, and you can wear them as a configuration quite happily. There's no detail lost in the lacings or the leatherwork.

This is a quality set all round, and you need this in your life. You can get the moss and the tan at the Rfyre mainstore. But if you want the black before everyone else make sure you go to the RFL clothing fair, as it's only open for a few more days.

Also shown - the new Miguel skin from Belleza, which I'll be featuring soon.
Lynne hair by Exile, created for the Victoria Bushfires Appeal.
Boots are from SFD, LaPointe and Bastchild, and Eclipse Development.

I'm a sucker for the unusual and beautiful in SL. And why not, we have that other place for boring things we have to say, wear and do right? So when Selos Dae of TRAP releases a new skin I'm there in hours regardless. But when it's this amazing? 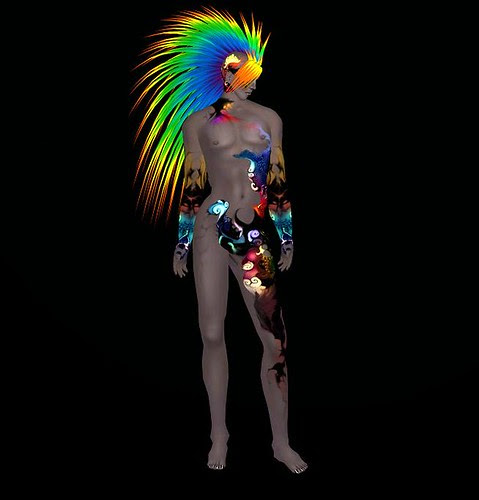 Positioning. Target in sights. Locked. Loaded. Acquired. I think it took 47 seconds after seeing the feeds.

This is a re-release of the Koi skin that Selos originally created for the Harajukubox Skin Faire of '08. I bought this blue, and my soul cried when I couldn't afford the fatpack. As it was an exclusive for three days only.

I wore this skin everywhere for weeks. And I was so thrilled to have an almost unique creation, but at the same time sad that this work of art would be mostly lost to the light of day. Selos recently asked on Flickr if the owners of this skin minded if it was released on new colours. Avarice warred with my sense of justice...and godamnit. The good side won. So I and the other people who were lucky enough to get this originally gave their yea.

The rewards are evident. Each day - the grid gets just a little more breathtaking. And a more fantastical place to be.

The skin is 1500l and you get 2 shades in each pack. This is the Rainbow/Fae pack, and you also get clothing layer options for covering your bits. I decided to use them and spare you that today. There's 5 tones, from the white to this drow shade. All eyes in this post are by Ruina Kessell of House of Ruin, all poses by Dove Swanson of [LAP] and the hair is SUMMON WINTER by Helena Stringer of the Stringer Mausoleum. And yes, I'm still capitalising that name. Deal with it.

When A Skin Isnt.


Some things you just HAVE to have.

And it's perfect for my response to Achariya's Posemaker Blogger Challenge.


I have a confession to make. I never remember to credit my poses. Sometimes this is because I've bought them months ago from obscure little Japanese stores that also sell robocat avatars and urinals, and I only find them in my inventory by the little running man icon. Other times it's because I've only remembered all the disparate pieces of my outfit by using the "(worn)" trick, and of course the pose I'm using doesn't show up. Probably because IT'S wearing ME. But the general truth is I'm a barely contained sack of forgetfulness, and when you combine lazy with easily distract - ooohhh...... something shiny! Where was I? Oh yes. I suck. It's true.

So Achariya's rather pointed stick to the gonads of the blogworld stirred me into action as well. Male poses are hard to find done really well in SL, and whenever I come cross any that don't put my "freakishly long arms and slender shoulders" - as a friend described them recently - into my hips then I buy up big. And no one does this better than Dove Swanson of Long Awkward Pose. Ok, yeah - I guess a disclaimer is necessary here. She's one of my best friends, but if I didn't respect what she was doing then I would KICK HER TO THE KERB AND STEP OVER HER FACE LAUGHING AS I LET THE RATS GNAW HER CARCASS. It's not a paean to her as a person, this post is about the technical expertise, research and humour that goes into every pose in the [LAP] portfolio.

The male avatar mesh is unforgiving, but she still manages to manipulate it into natural contours and expressive positions. And avoids the breaks in the shoulder joints even whilst reaching the arms up above the head, and that takes a buttload of skill and care to do. I have her earliest poses "Dude I" all the way up through "Dude VIII" to her brand new "Boy Bloggers" set - yes, there's over 150 male poses - and the progression is amazing. You can see how much she has learnt over a year and she's poured all that into all these static poses. When she finally moves into animations and AO's she's going to take over the world. 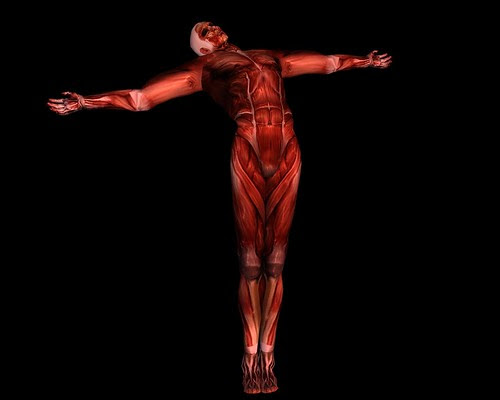 Dove and her companion Lawless McBride spend hours researching pictures in magazines, television and the internet always trying to find something interesting and innovative that will translate into SL. This doesn't end at individual poses, her couples and group sets are also meticulously made and hours are spent testing them. And I know it's hours as I often get dragged along to donate my pixels so she can reposition and tweak. If you were one of the twenty people who were at the final adjustments for the epic "Takin' Over The World" set at Christmas time then you know what I mean. A simple fifteen minute ad shoot turned into a two visit three hour marathon until Dove got all the positions exactly right. She won't release anything that's less than perfect, and this dedication that shows in all her finished works.

But my favourite thing about Long Awkward Poses is that they are interesting and filled with emotion. From handstands to emo sulks to diva style to the spectacular buttshot one that Dove made just to gross people out, you won't find any other poses that allow your avatar to express itself with more playfulness and joy. Or attitude. Or despair. There are a lot of general modelling animations on the grid that display the av perfectly for runway or catalogue work, but if I want to take a picture with meaning, interest and passion then I go straight to my overstuffed [LAP] folder.

[LAP] The Winter - yes, of course this one is my favourite!

Lastly, I also need to veer just a little towards personal mush by reminding everyone how generous Dove is as a business owner. She donates her profits and her time to vital causes. She created an AO which is free to all newcomers (and legions of freshly created alts.) And she's just launched a "Blogger's Appreciation Program" with a purpose created set of poses for both men and women which she's giving away. So all this is why I'd be a fan of [LAP] even if I'd never met Ms Swanson. Okay, so I wouldn't know just how hard she works, but I'd still be all over the end product like Mike Tyson at a beauty pageant. And if you look at the feeds recently you'll see that I'm certainly not the only one that thinks this way.


So if you see me do another post without crediting the poses ever again, feel free to hit me. Odds are though, that you'll find each and every one of them at Long Awkward Pose.