Hey bishes - I'm back. BleedingEyesBleedRed CrawlingDeathBlade doesn't just make the blackest jeans ever..... but he has one of the coolest names too!!! So even though they are crap I'll buy everything he makes. Did I mention they were black? They cling to my cawk and show up my third testicle George perfectly when I'm looking for comics/movies/song lyric quotes to butcher as my blog titles. So reap it.

And reap these shitekickers I found in the most obscure japanese sim that I'm not handing out the landmark to, hors. I thought I'd try something new..... and I didn't get the black!! I bought them in midnight, onyx, jet, coal, pitch, charcoal, sable and ebony instead. Oh, Daddy - were those all for me? Just look at the detail up close, but no hurry because I'm not peeling these off my feet all winter. Unless something cooler gets released tomorrow. Heh.

I'm also setting off fechin airport alarms with these piercings that go from my nose to my lip and connect with a chain to my chest clits. I tried to get it in black, but the vile hor wouldn't retexture it. So I spent the next 7 hours standing in her store trying on everything dove had bought me that week and modding my hair to stuff under this toque, eh. This was while I was telling autumn that I'd rather be dead then red.... ate a samosa out of berry's sexy arse crack.... called winter a girl and elusyve a hairy biker man. Those bishes love me.

So that's my blog for this month. And probably the next one. Time to get my scrubby blackheaded arse off to watch the fechin Broncos break my heart all over again, while dove goes shopping for cucumbers. And to remind someone of the bond of the Band of Brothers... and you thought Monty Burns bided his time???

This is a tribute to someone that dragged me into the fashion world when I kept posting comments on his blog. He and Dove Swanson adopted a noob vampire with NO ideas how to develop his style. All I knew is that I didn't want to look like anyone else. And he helped me do that. It would have been too damn easy to do a gushy wind beneath my wings type appreciation... plus I owe him quite a few burns.

If I need to mention his name, then I haven't done it right.

Posted by Winter Jefferson at 1:32 AM 7 comments:

Get Away From Her You BITCH!

As Shangreloo alerted everyone on Fabulously Free In SL 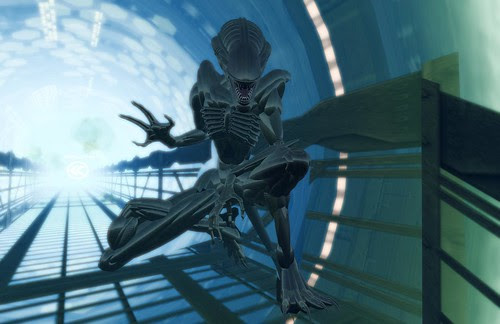 1l Alien avatar available here - but be nice and give the man a tip for his trouble.

An ancient land, filled with unique fauna, extraordinary flora of all types - at least around the coasts - and filled with history and a vast tribal heritage. None of these tribes more beautiful and culturally rich than the Bogans.

A Bogan can be easily recognised by the strange way they fashion their hair. Named after a small tough fish, we can only surmise that the hair gained it's name as it contains the same amount of oil one of these real mullets do.

The Bogan also wears a similar garb of flannellete and torn denim no matter where in Australia you may find him - and he is almost always called Bazza. (On rare occasions you may also find a Davo.) The female of the species usually goes by Shazza. A type of protective camouflage, perhaps? The Bogan has only a few natural enemies - the police, the tax department, the employment office and if they drive Holdens they need to beware of Ford owners. And vice versa.

Their main protection from the searing summer suns in this brown land are the rubber coatings on their feet. One of the favourite methods of play by a Bogan is to confuse all interlopers by referring to them as "thongs." This male specimen stayed still eating his pie long enough for us to also show you his main method of attracting females - the tantalising hint of pubic hair showing just above the waistband. 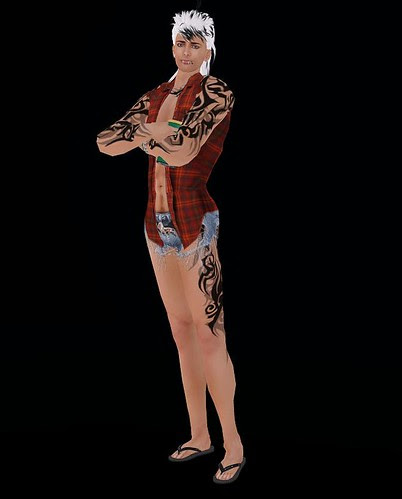 The language of these mystical people is also haunting and lovely to the ear. If you listen in the evenings, the streets peal with the mating call of "Where's me farkin beer woman?" which is accompanied by a megadecibel rendition of their tribal anthem, Khe Sanh.

All in all, these amazing people deserve to be listed as a unique culture and cherished. And we need to be tolerant and respectful of their worship for their tribal gods, The Legendary Brocky King Of The Mountain and The One Named Baaaaaaarnsey. And keep them well supplied with their beloved Veebees and Winnie Blues. This can be best achieved by establishing more dole offices in regional centres where the Bogan population is thickest. If you plan on entering Bogan territory, however - we recommend you take your own water. Not that it's considered unpotable in these lands, but rather due to the hygiene levels of these people we aren't entirely sure if they have any. It's also a good idea to equip yourself with cassettes by Accadacca as an peace offering should you run into trouble. It's no longer legal to hunt the Bogans.. but occasionally they may decide to come after you. You should be safe in their lands as long as you don't enter in a Nissan Skyline. And steer clear of servos, bottlos, and blue light discos.


It's time we disproved what they say, Nobody likes a Bogan.

Basically I was seized by Sasy Scarborough and given a forceable make over for Australia Day.

"Style" details are
Overtorn Denim Shirts and Muscle Shirt by Jungle Wear
Flip Flops - or THONGS as we call them here by Detour
Autumn Hair by Philotic Energy (Thank you Aems!)
Tattoos by Addixion
Cigarette by Nait Smith
Pictures of myself being molested by a koala by Sasy Scarborough on Flickr

This unit boarded the salvaged ship Nostrano as commanded, and scanned for signs of life. The last broken, static ridden communiques The Directive had received had ended in a choked off scream. 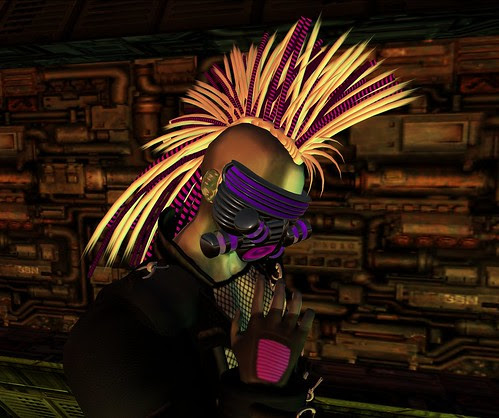 Analysis - atmosphere unable to sustain human life. Human organic matter strewn upon walls, floors and ceilings. Findings include similar situation even on the exterior of the hull windows. This unit can not calculate what could have caused this.

Control room similarly deserted. Last entered co-ordinates appear to have the trajectory of Nostrano directed towards the dark star X-1211 at Andromeda's outer rim. This unit interrupted this telemetry to place the carrier in orbit around closest planetfall.

Doubleplus strong recommendation to The Directive is to destroy the Nostrano from a secure distance and contact insurance agency for amends. Abort, incinerate, reduce this ship to atoms. Sub-atoms.


This unit is not programmed for human characteristics. Question - is this fear?

P.S. - these cyber pieces come with an awesome glow, but due to the new glitch I couldn't do them justice. They still look damn good when you aren't trying to take pictures of them.

Posted by Winter Jefferson at 10:58 AM 4 comments:

Avid was one of my favourite design houses in SL, mainly because of the super realistic, butter soft leather that Darwin Mizser creates. She knows how to dress me when I'm in one of my "Okay, maybe I'd better have a day where I don't look like the problem child of the Vampire clan" moods. I'll be completely honest though, the last few male releases have been fairly disappointing, Black Snake especially. So just last week I was swearing to Dove and Lawless that I would never be buying another Avid ensemble again.

You people just love proving me wrong, don't you? 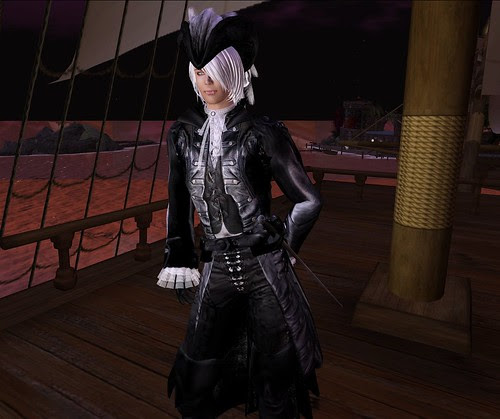 "Love's Mutineer" had me racing to the store and buying blindly before the texture had even rezzed, thank goodness I landed at the men's section or who knows what I would have ended up with? A minute, intensely critical review of every tiny prim and leather fold still had me cackling happily. Plus it comes with a rapier. (I've never been a cutlass man, too bulky to accessorise properly.) There's several configurations of the top, you can have it with or without the vest - but the vest looks so damn good there's no real reason to wear it like that. Unless it's to show off the delicate detail in this lace shirt.

When it comes down to man's most important decision - which are cooler, pirates or ninjas? - there has never been any hesitation for me. As pirates get wenches. And "International Talk Like a Ninja Day" would just be an epic fail. So I was happily swinging around the lines of the Black Sparrow and telling several ladyfriends in IM that I was now Captain Winter of the Blood Seas, scurvy vampire buccaneer. Funnily enough they were all still on my friend's list when I logged in just now. I needed to complete the ensemble, as every Jack Sparrow fan knows a pirate is nothing without his hat. So I turned to the Bard's Hat from Illusions, and whilst I was there I replaced the boots that came with this ensemble with the Cavalier Boots. Which was a damn good thing in the end, whilst taking these photos I accidentally let off one of the cannons which are just out of shot. I heard a boom, and I don't know if it really had any effect on any of the other ships in port... but all of a sudden all the surrounding green dots on my minimap starting converging on me. So these boots helped me with the tactic that all the best sea skirmishes are won by. I hauled up my anchor and I ran like fuck.