So the Date For Down Under got off to an extremely rocky start. Catero Revolution had decorated Seven Ultra Lounge beautifully for us, and Malkavyn Eldritch retextured our auction podium so it looked as if it grew right there in the club like a neon violet toadstool. People started filing in an hour early, and at 20 minutes before the auction was due to start it became clear that we were in trouble. God bless SL, it was one of those days that makes you want to start up a chainsaw and pay a visit to a certain office in San Francisco. The server just wasn't able to cope with that much fabulous all gathered in one spot and went down in a screaming heap twice - just like a certain vampire you may be acquainted with. The delicious Ryker Beck offered her home sim but it soon became clear that no, that wasn't going to happen either as it was a homestead with a cap of 20 avatars. It was around this time that some people started IM'ing me and telling me to cancel.

Then the sun shone through the clowds when the wonderful Jackson Vantelli earned his future spot as an archangel when he offered us his sim that was set up for a wedding, so we packed up the whole kit and kaboodle and 100 people descended upon it en masse. Hooray, says I - the sim can take us all, and the auction machine was working! It's .... it's working...? Damn, it's working, right? It's NOT??? AGGGHHHHHH WHY AREN'T YOU WORKING YOU PURPLE PIECE OF SHIT!

At this point it was 40 minutes past the estimated start time. And as wonderful as the crowd had been - right down to the awesome Seven staff who came along and did their thing on a strange sim anyway - it was clear that they were becoming restless. So. Yeah. Um.

[19:42] Winter Jefferson shouts: SCREW THE BOX. We are going to do this the hard way. This auction is going live!

And after that... it was a thing of sheer beauty. Everyone called out their bids and I did my best to follow them in the madness of an extremely pumped up crowd. Okay, so we were bidding on grey blobs, but that didn't dampen the spirit of the event at all. And personally I think it worked out better the anti-technological way. It was definately more intense and involving, and the psychological warfare was like grand slam tennis.

Some of the highlights were:

- The heated battle between Antonia Marat and Callie Cline for the startlingly naked Truth Hawks, sporting the most miscoloured peen in SL history.

- The dizzying heights that the bidding on Payton Heron climbed to - which finally ended after a full twenty minutes at sixty five thousand. And then Jonny Tobias strutted up to the stage and broke precedent all over again.

- The fact that I'd thought Grady Echegaray was on the sim when I opened up the bidding on her... and she and her friends were stuck elsewhere. So she appeared just in time for her respectable closing bid of six thousand... but then her friends clubbed together and sent a donation of another twenty thou.

- And Achariya stepping up to the podium, the bids starting at one... two... three... then the voice of Katat0nik Pigeon cut through the crowd with "twenty thousand!" - and a half a dozen Ach fans almost went for her throat.

With the unbridled generosity of the bidders and the patience of everyone over the epic four hours.... the amount at the end of the day was $643,477l. I have the results of who owns who's ass here, as I know everyone wants to know. The numbers below don't add up to the total because we had a few people just dropping off donations and not bidding, and there is also a sum of 30k that will be arriving soon as someone crashed immediately after their winning bid.

I was lucky enough to be bought by my good friend Milli. I have heard frightening ideas from our friends of what to do with me, though - including forcing me to watch Home Shopping Network for hours on end. *shudder* But wait, there's more! I'm not offering steak knives... but I do want to send a very deep, undead heartfelt thank you to everyone who was a part of this in any way. That's the biddees who volunteered not only their time on the day, but the two hours they are spending with the bidders who bought them. And some of those gorgeous people are amongst the busiest on the grid. I also want to thank the buyers, who opened their hearts and wallets for this most urgent of causes, resulting in thousands of real dollars being donated to the bushfire victims who lost everything. I also had great support from people like Voshie Paine and Milli Santos who helped co-ordinate the event, and I have massive appreciation for our DJanes Sierra Sugar and Summer Deadlight. My gratitude to the management and staff of Seven Ultra Lounge for allowing us to attempt to hold the event at their club, and lastly the 99% of people who were there just having a good time supporting the cause and keeping it drama free. All the proceeds went directly to the Victoria Farshore account that Dakota Buck has registered with the Australian Red Cross, and I will be sending the full transaction history along too.

And lastly I need one more thing from everyone. I need you all to forget about this and let me go back to being mean. It's taken me a year to build up this reputation as a badass, FFS.

As a final update, the 30k was delivered as soon as that bidder was next online, and one of Callie Cline's friends who was unable to make it on the day sent along a further 20k. So the auction's final total was $693, 477l. I'll let Autumn or Kota announce the current Appeal total.

Labels: Date For Down Under

More details to follow .... when I can see straight again...

Remember how I mentioned in my last blogpost how helpless and frustrated I felt as I was "spectacularly unskilled" and had nothing tangible to offer the Bushfire Victims Relief Appeal? (Apart from buying everything that was being made for the cause - and as lovely as the Truth "Victoria" hair is it just don't look right on me.) Well it turns out that there is something that I'm very good at. And that's walking up to complete strangers and telling them that I want to pimp them out. And so I present to you....

Being held at Seven Ultra Lounge on Sunday the 15th of February - this weekend - at 7pm SLT. A selection of some of the most awesome and generous people have volunteered to have their flesh peddled for this most necessary and urgent of causes. It's going to be clean, classy and a metric buttload of fun as we parade the best slabs of pixelmeat for your bidding pleasure. The winner gets a platonic two hour date at a mutually agreeable day and time with their chosen companion. For those that don't know that word, it means that you aren't buying pink and blue poseball time, but an interesting couple of hours with fascinating conversation, dinner, dancing , maybe setting the world to sunset together as you have a picnic on a purple sculpty seashore... that kind of thing. Some of the biddees are also offering extras such as custom clothes or hair, created exclusively for you.
We are featuring a broad range of boys and girls from all walks of Second Life, so there is someone that is bound to appeal to you. Some of the participants include

I can guarantee that 100% of all funds raised are going straight to the Red Cross to be distributed in rehousing and feeding the 4000 people left homeless by the bushfires that erased whole towns in Victoria this weekend. Autumn Hykova and Dakota Buck have been working tirelessly to ensure that these devastated people get the shelter and medical help they need. And please show your appreciation to the biddees giving their valuable time, the designers and creators of Second Life who are donating goods and profits to the Appeal, and the brilliant staff and management of Seven Ultra Lounge who have generously allowed us the free use of their amazing club. And they have even offered to break their club rules and let us use gestures - HOOOOOOOOOOOOO! Even the DJane Sierra Sugar and the photog Elusyve Jewell are working this event gratis. There will also be donation kiosks set up at the venue if you would like to ogle the biddees but your girlfriend would kill you if you walked in with a model.

So come join us and buy yourself some fun. The club has waived all entry fees for this event as well, so don't let that hold you back. Just make sure you get in early as we predict this sim will be hopping.

We know how serious this situation is, and we aren't making light of any of the suffering these people are going through. This is just a way to get everyone participating in fundraising and feeling good doing it. If you have any questions about the auction message myself, Winter Jefferson first - and if it's about the fundraising aspects Autumn Hykova and Dakota Buck are your best contacts. Special thanks to Catero Revolution for making the poster. 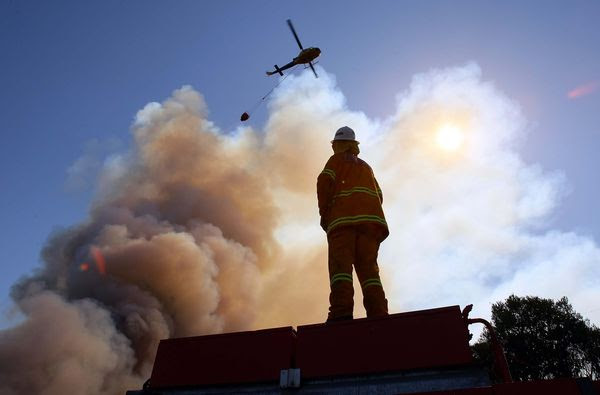 ...but this is important.

I'm sending out an appeal of behalf of all those affected by the devastating Victoria Bushfires.
It may suck that your textures won't load. And it's frustrating when TP's are down. But these people are experiencing their world being borked on a level never seen before. At the time of writing this post, the death toll is 108 and climbing. Australia was shattered by the 2002 Bali Bombs, and we lost 88 lives in that. This is going to resonate for in my beloved country for a very long time.

But there are survivors, and they need help. Entire towns were wiped off the map this weekend. Not only did people lose their entire homes - but they have nowhere else to go because their neighbours, friends, families all lost theirs too. And there are no cars left to leave in. Our Prime Minister Kevin Rudd has pledged an immediate relief fund of AU$10m but it's going to take a lot more.

There are two ways you can help.

The Red Cross has set up an appeal online. They are the most reputable relief agency in the world, and you know that 100% of anything you can spare will go straight back to rehousing and feeding these poor bastards.

Or you can join in inworld. Autumn Hykova and Dakota Buck are organising a fundraiser, and are asking for participants. If you are a designer, a pose maker, an artist, a builder - anything, please get in touch with these ladies and let them know what you can do to help. Even if you are spectacularly unskilled like me I'm sure there is something you can offer. I know we are suffering from charity fatigue, but these events don't ever slot in to a time when they are acceptable and easily dealt with. This is a plea to all, but especially any Australians involved in our safe version of the world.

Posted by Winter Jefferson at 9:22 AM 4 comments: