Yes, I found a designer that pays so much attention to detail, even his packaging and pose stands are beyond awesome. I'm posing in front of them in this picture - its the new store Arcavim by Drack Diesel, a game design student who has brought his skills to SL. He's been a builder for a while, but now he has branched out into this WAY too cool Vernesque/Steampunk inspired clothing line.

To quote from Drack's mission statement "...announces his new store in Second Life, Arcavim, and his Noble Traveler Collection. The Collection is comprised of men’s clothing in a versatile color palette with diverse styles. Elaborate sculpts, many patterns with multiple scripting options pervade the offerings in the Collection. The colors are comprised of mix and match tones of brown, black, grey, and gold with accents of forest, plum, and clay. The numerous interchangeable versions and combinations make for many unique looks for every occasion."

Every piece in this collection had me gaga for the workmanship, the intricacies of the details but most of all the rich textures! The sheen on the Gold Travellers Vest was the thing that had me rushing over there before anything else had rezzed, but I came away with one of pretty much everything Drack sells in the end. I'm enamoured with the palette, and almost everything that has prims on it is scripted to colour change so you can work within this range as much as you like.

The entire clothing line makes an innovative use of sculptys - you don't often come across a swing jacket tail made this way.

At present there is no ladieswear available, but the hats, boots and goggles are certainly unisex - go get 'em, Ach - but it's worth a visit anyway as it's a fascinating build. It's in the hangar of Drack's airship.

This may not be your usual taste or style, but the pieces are all such quality that you need some of this in your inventory. Uh huh. It's the most elegant and well made clothing I've ever seen in this genre, and I'll be happily stalking his store to see how it develops in the future. It'll be interesting to see what sort of video game Drack makes in the end, but he's well on his way to winning SL.

Well, I stand up next to a mountain
And I chop it down with the edge of my hand 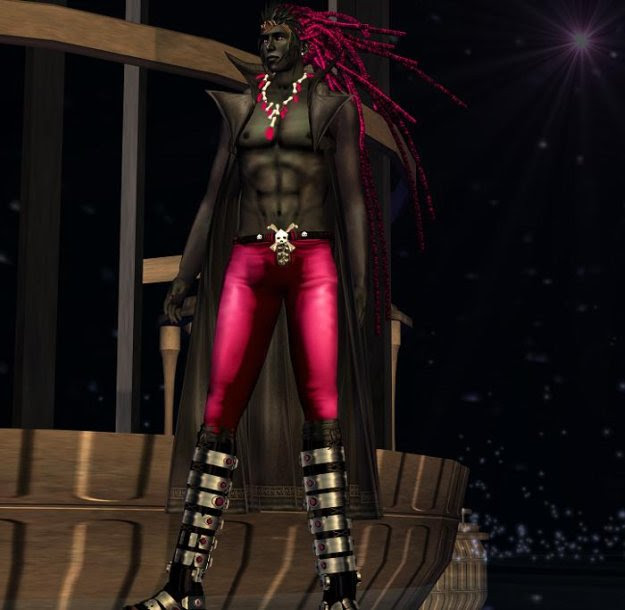 Well, I pick up all the pieces and make an island
Might even raise a little sand

This is not so much an organised properly choreographed LOTD; but more a serendipitous collection I should call "Three things that I got on the same day that looked kinda cool together so this is what I wore."

The Savile Row Tuxedo from G'bberish** - how could I not fail to fall in love with something so geeky, and yet SO well made? These colours are so smooth and creamy together. There were prim sleeves too, but I did without so I could proudly sport THIS.

Simply called "Typewriter Bracelet" it's by [YGD] and it made me drop and give twenty glees when I saw it. And yes, it IS as heavy as it looks. Every time I went to push my hair off my face I knocked myself over. But we suffer for style, eh?

And lastly this amazingly crafted monocle from .:*D*:. I popped into MandyMandy McMillan's store after inspecting the buttcrack roses on a girl shopping at KMADD for hair to pick them up for Elusyve. MandyMandy was there, and was kind enough to gift me with this which went under the innocuous name of "Glasses No.20 Right."

Again, a delighted squeal when I tried it on at home, she's lucky I didn't on the spot or I would have been fanboi'ing all over her messily. I love spiders in a totally non-creepy type of way and this is such a whimsical treasure that I'll be watching the world through a cobweb for several days.


So it's not quite Steampunk, nor Mad Professor; but I wasn't reaching for a particular style. I just threw things on that I was all about today, it's a damn good thing they looked okay together. As I would have worn them anyway. Amazing how that works sometimes, isn't it?