Achariya Rezak said...
*grin* I wanna see if you can make furries look cool. Using the free furry avatars, I want you to pick the one that expresses your inner beast, and then make him look like you.

After I stopped inventing new swear words between gritted teeth, I did as was bid and stopped by Wingless Emoto's free Furry avatars - which are amazing. After being unable to find a bat - and realising that if I was a wolf I'd have to fight myself - it hit me that of course my alternate familiar had to be an Arctic Fox. Being cunning, fluffy, and well... stone cold foxy - it was me to a T. So I was able to quite confidentally answer Achariya's part of the challenge. Find the beast that was me and still make him recognisably Winter.

At first I had a hard time dealing with this. There's nowhere to rez my fangs!

But after a while in my new fursuit, and after adding the items that I feel best represent me - Stringer mohawk, Schadenfreude beater, SN@TCH shorts, Retox Fishnets, Spider, Magika and Action accessories - I realised that I felt pretty good. No diminishment of the essence of Lord Winter, just rocking it Vulpine style. I managed to drop into a few shops and do the Oz Frolic like this and no one tried to give me calcivirus. So I looked at some of my other challenges.

Kenzie said...
Hmmm either channel Humphrey Bogart in something from 1800Betties or a grungy/punk look with an outfit from Gearshift and some chucks.

I already owned a few items from Gearshift. But could I work them with this new form? Now THAT was a little more of a challenge.

I think one of the problems our Furry community faces clothing wise is long pants. I could have detached the shaped legs but that would have been cheating. And unfaithful to what I was trying to do. 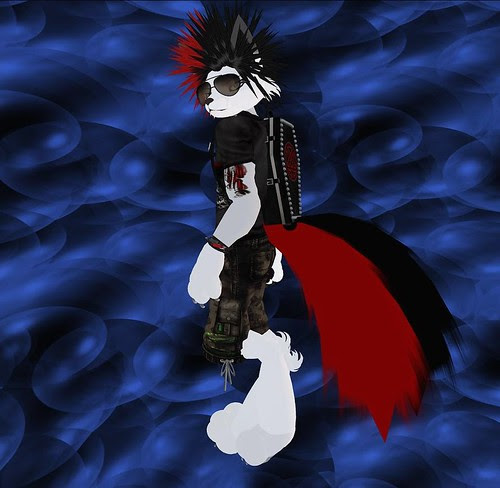 So I found their Predator shorts worked well, and added the Faster Harder t-shirt also from Gearshift. I couldn't oblige Kenzie with the chucks today, they don't seem to come in this shape. Get on that will you please, SakuraDawn? Adding Black Maria hair, the SN@TCH coffin backpack, Kari audio wire bracelet and Prozak Biomech tattoo- and a VERY stretched out pair of Armidi aviator glasses - I think this is nicely grungy and yet still something I'd be happy to wear with either shape.

This is the Striped Shirt, the Brown Capri pants - again, short length is sadly necessary - and the Lolita glasses all from Nylon Outfitters. With Bare Rose hair, and Genesis necklace. A store that I'd walked into in the past yet never stopped and really looked at. Thanks for waking me up, Noirran.

Attitude and self shine through no matter what kind of pixels you are wearing - that's one of the best things about Second Life. I'm not ready to go Furry just yet, as I like my fangs as they are. And I have marginally better breath in my Vampire form. But this Dress Me Up definately gave me pause for thought, and yet another outlook on SL. I still have a few more to go but seeing at least one of them involves jeans I'll be regaining my Undead mojo to do them justice. Now pardon me whilst I go see what this yiffing caper is all about.

Labels: dress me up