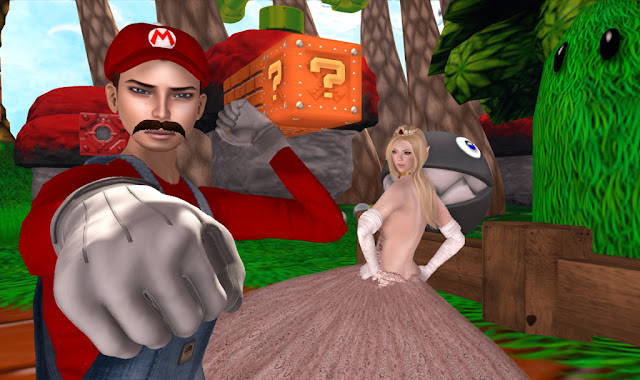 Last night Winter took me to Electrobit City, an 8-bit wonder of the SLworld! For all avatars of the Nintendo generation, Electrobit city is run by an amazing team of 8-bit fanatics. They have created a few areas (some still under construction) where people can navigate through parts of the Mario universe in the more modern... 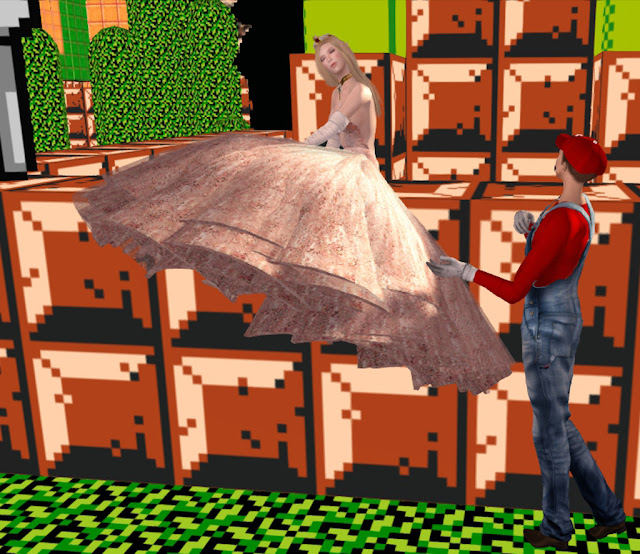 ...and 8-bit style. These areas are complete with sound effects from the game and iconic Mario characters. We're trying not to show too much as there are some really fun things to discover. In the future it's looking like there will be some RP opportunities in the 2D-3D community and well! 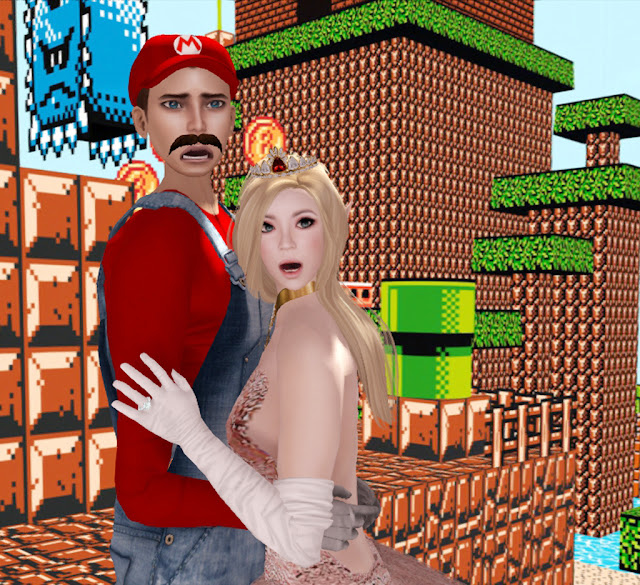 Once you land take a moment to adjust. I highly recommend clicking the flashing pole when you arrive and take the tutorial to learn how to navigate. There's a fun prize for completing it. There's also something fun in the first level when you reach the castle so don't give up, just watch out for the Goombas!

Posted by Steph Bailey at 4:53 AM 3 comments: Links to this post

...and all of a sudden he realised that he existed. Why? Was it important? He spent some time on his back, just watching the gulls whirling above him as he mulled this over. "Yes," he decided. "And no. I'm here, that's unmistakable. I feel these splinters working their way into me, when less than a breath ago I was of these boards myself. But I feel no urge to act upon this knowledge. Hmmmmm..." He sat up, so suddenly that his wooden form quivered a few times as it locked into place. Brushing shavings off his thighs, he looked around at his new world in delight. "It's all so dimensional, so full and it has air, and space, and light, and volume and... and how do I know these words? These concepts?" Something flitted past the corner of his vision as he gleed over life. His head turned. It turned much further than yours or mine could. But it was worth it. There she was. A glory of youth, of vivacity, a vision constructed of cherry wood. She was pretending to not notice that he was staring at her, but of course he was too new to understand the wiles of women. She struck the most coquettish pose to exaggerate her grace, then arched her form into a perfect arabesque as she circled the carousel on her skates. He was enchanted, as was intended. After the perfect amount of time had elapsed, she chose to notice his presence.  She skated up to him, then stopped - sending a shower of sparks across his body. He covered his face with a wince, then lowered his arm as she circled him. "You are handsome;" she advised him critically "but you are lame.  Come with me. Let's remake you." She led him to a trove. A sunlit cave of wonders that was also a game of chance. He darted from the red machine to the blue one, and lost his balance somewhere near the yellow, completely overwhelmed. He knelt on the green carpet and  whispered, not daring to look up. "All of this? I can choose from... ALL OF THIS?" She giggled, taking delight in his confusion. "Shhh... don't fret, pretty splinter. I want you to look good on my arm. Lets choose you a new self." She led him back into the open, marveling at how easily he took to wheels. But everything is easy to learn when you are brand new, and don't have a head stuffed full of misconceptions. They frolicked along the boardwalk, he barely looked down at the planks that were his creator. She took great care to remind him that she was smoother, that her curves were more appealing and that her cherry wood was of great value. And she reminded him often. He smiled at her, not knowing that he should have been unhappy at her game. "Oh look!" He led her by the hand to the stall where balloons bobbed against their strings, and gazed up at them in delight. He untied one from the rack to hand to her, then realised that one single balloon was not a fitting enough tribute to her beauty. One more. Another. Several more to balance them out. And now to add these and... "For you." he bowed as he presented her with his prize. He grabbed her ankles as she was carried off shrieking, the winds claiming her from the pier. Luck was on their side this day, as he was able to haul her back from the skies. "But..." he asked her in puzzlement. "How...? You don't look that light?" not realising of course that this is a dreadful thing to say to a lady, no matter which kind. She sobbed in his arms, tears of sap running down her face as she confessed "I'm not re-hea-hea-lly cherry.... I'm just BALSA WOOD WITH A CHERRY VENEER. " She turned her face away in shame, not daring to meet his gaze.

He looked at her, stricken as she pulled out of his arms, preparing to flee. He shook his head and inwardly declared no. He clutched her heaving form and pulled her in close, then turned her face to his and told her steadily. "I don't care. You can't leave. I love you. I have no idea what love is, or what I'm supposed to do with it. But I LOVE you."

She stopped crying in disbelief. She had been so contemptuous of him, not realising that his was a heart of oak. Her entire being lit up and she beamed at him, then took his hand and whispered. "I'll show you exactly what you are supposed to do with this. " That was three years ago, readers. They fell in love, mad delirious eternal light filled love. They now have five beautiful children that they hold very high hopes for, even Bricky who was their "Very Special Child" and was treated no differently than the others. (Even if he did have to wear a muzzle in public.) The children were  always happy to visit The Arcade, especially on a Friday night when they were kicked out of the caravan so Daddy could stuff Mummy full of sawdust.


Oh yeah, and visit The Arcade.

Pictures by Eve Petlyakov.
Words by Winter Jefferson.
Mannequins by The Domineaux Effect
Everything else available from the fabulous merchants at The Arcade in March 2013.


Posted by Winter Jefferson at 5:57 PM No comments: Links to this post

Labels: Eve Petlyakov, March 2013, Second Life, Second Life Fashion, The Arcade, TheArcadeSL, TL;DR, Winter Jefferson, Yes I Already Named A Post I Got Wood Once So I Couldnt Get Away With It Again Could I
Newer Posts Older Posts Home
Subscribe to: Posts (Atom)